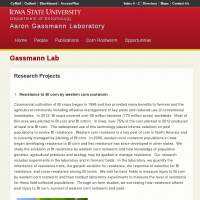 Commercial cultivation of Bt crops began in 1996 and has provided many benefits to farmers and the agricultural community including effective management of key pests and reduced use of conventional insecticides. In 2012, Bt crops covered over 69 million hectares (170 million acres) worldwide. Most of this area was planted to Bt corn and Bt cotton. In Iowa, over 75% of the corn planted in 2012 produced at least one Bt toxin. The widespread use of this technology places intense selection on pest populations to evolve Bt resistance. Western corn rootworm is a key pest of corn in North America and is currently managed by planting of Bt corn. In 2009, western corn rootworm populations in Iowa began developing resistance to Bt corn and this resistance has since developed in other states. We study the evolution of Bt resistance by western corn rootworm and how knowledge of population genetics, agricultural practices and ecology may be applied to manage resistance. Our research includes experiments in the laboratory and in farmers’ fields. In the laboratory, we quantify the inheritance of resistance traits, the genetic variation for resistance, the response to selection for Bt resistance, and cross-resistance among Bt toxins. We visit farmers’ fields to measure injury to Bt corn by western corn rootworm and then conduct laboratory experiments to measure the level of resistance for these field-collected populations. Through on-farm studies, we are testing how resistance affects pest injury to Bt corn, survival of western corn rootworm and yield.
Resource Category:
Faculty
Category:
Showcase Item
Site Managed By:
Biology IT
Tags:
ENT